Captain Martha J. LaGuardia-Kotite is a motivational speaker delivering keynotes for corporations like GE, Jacobs and Astellas Pharma US, presentations at leadership symposiums & gatherings of all ages about leadership, resilient crisis management, saving our oceans, overcoming fears & taking risks to achieve bigger dreams while balancing life’s demands. Passionate about living a life to make a difference she shares heart-felt insights and personal stories from her 29 years in the Coast Guard and award-winning books to drive change, build awareness, giving light and tips for business and team solutions to reach success. Topics include inspirational insights on leadership, increasing diversity, resilient crisis management as well as overcoming and facing difficult challenges like suicide prevention.

An award winning author of five books, including So Others May Live Coast Guard Rescue Swimmers Saving Lives, Defying Death and Changing the Rules of Engagement Inspiring Stories of Courage and Leadership from Women in the Military. A journalist, she published stories in The Boston Globe, regional magazines and US Naval Institute Press.

A wife and mother of two sons, Martha served 10 years on active duty with two tours at sea as one of the first woman leading teams on missions aboard a ship sailing the Pacific Ocean and as executive officer and the only woman aboard a 110-foot patrol boat patrolling the Atlantic Ocean and Caribbean Sea. Assignments include law enforcement, search & rescue, joint operations, contingency planning in Alaska, across the West Coast of North American, Hawaii, Key West, Pacific Northwest and New York. Transitioning to the reserves in 1999, she moved from Seattle into New York City working for a public relations technology firm for clients like IBM.  As a reserve officer, her part-time duties for the Coast Guard included as Sector New York’s Enforcement and Governmental Affairs Officer then contingency planner after 9-11. Hand-picked to work in Washington, D.C. as the Commandant’s Press Secretary, the bookends of this tour were the Haitian earthquake and 2010 Deepwater Horizon Oil Spill responses. Other tours include senior leadership roles in Mobile, AL, Boston and Cleveland, Ohio.

After growing up in Destin, Florida, Captain LaGuardia-Kotite’s professional studies began with a Bachelor of Science in Government from the U.S. Coast Guard Academy and a Masters of Liberal Arts degree in journalism from Harvard University. An Emergency Preparedness Liaison to FEMA she earned the highest national incident management certifications as a Type I Public Information & Liaison Officer. She is a trained in Applied Suicide Intervention Skills. Awards include the Meritorious Service Medal, six Commendation Medals, three Achievement Medals, numerous service and team awards. 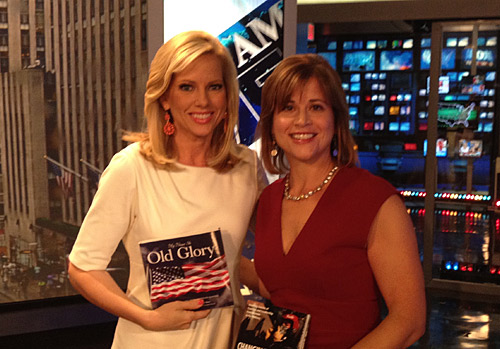 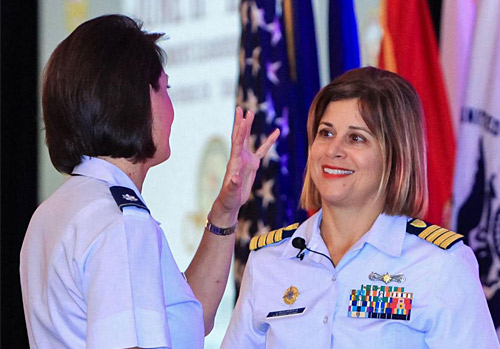 Why are you so passionate about serving as a motivational speaker?

One of the greatest joys I have received from my 29-year career as an officer in the US Coast Guard and my award-winning books are invitations to lend my experience to talk about leadership, achieving a bigger dream and talking about my own crisis management and resilience experiences in national events.My presentations include these topics: Leaning on my career in the Coast Guard and leadership insights, I've addressed diverse audiences as a keynote speaker or as a breakout presenter for corporations, schools, graduations and professional organizations - men and women of all ages and phases.I am dual certified at the highest level, Type I, in the National Incident Management System as a public affairs and liaison officer as a result of my assignments. I am also trained in Applied Suicide Intervention Skills Training (ASIST).I like making a difference. Helping people overcome their fears, take risks to achieve their bigger dreams by discovering their own beyond is a great way to spend the day.I enthusiastically share the steps needed to achieve their mission, their dream, sprinkling in inspirational stories from my career and from those I have written about in my books.My career in the U.S. Coast Guard at sea and ashore and work in New York City working for corporate clients like IBM, have given me plenty of experiences to learn about leading, managing teams in a crisis and at the highest levels of government or industries.Hand-picked to served as the US Coast Guard Commandant’s Press Secretary in Washington D.C., I worked as a Coast Guard spokesperson with the White House, Department of Homeland Security and international media through the bookends of this assignment: the Haitian earthquake in 2010 and the Deepwater Horizon oil spill in the Gulf of Mexico.When Hurricane Sandy struck the Northeast seaboard, I responded to help as a Coast Guard Emergency Preparedness Liaison Coordinator for FEMA Regions II and I (New York and Boston).During the triple disasters of the summer of 2017, I served as the lead U.S. Coast Guard liaison in the Florida State Emergency Operations Center before hurricanes Irma/Maria spun up the entire state. I worked through the aftermath. I witnessed chaos, I helped find solutions. I lead a team through the crisis to help save lives and provide shelter and security for those in need.I enjoy providing insights of inspiration from my life experience and what I've learned from others to make a difference for your audience.I'm ready for more events. I'm ready to help you.

What was your first speaking  and writing gig?

I moved to Astoria, Oregon to join my shipmates aboard the Coast Guard Cutter Resolute after graduating from the U.S. Coast Guard Academy. We soon got underway for Alaska where I volunteered to do the job no one wanted to do: serve as the public affairs officer for the ship representing the U.S. Coast Guard during the Exxon Valdez oil spill clean-up in Prince William Sound. I wrote press releases,  gave media interviews and got to know the people who lived there, helping them understand what was being done to clean up the beaches and help them recover.My shipboard experiences in Alaska, the West Coast of North and Central America and as second in command of a 110' patrol boat, led me to seek opportunities and fulfill my passion for writing and telling stories. My adventures at sea and ashore enriched my opportunities to write and talk about extraordinary rescues, men and women, tragic events, drug busts and even whaling and fishery cases from the Caribbean Sea and Atlantic Ocean to the Pacific Ocean and beyond.

How’d you get a job in Manhattan?

When I left active duty and transitioned into the reserves (part-time U.S. Coast Guard work), I was a well-known public information officer and spokesperson. My skills were relatable to the needs of a technology public relations firm in Manhattan. Offered a job, I moved into the city, helping clients like IBM achieve their goals by telling their client and product stories.I’ve appeared on national television and was interviewed by top-tier newspapers and magazines around the country about the Coast Guard and my technology clients like IBM.

When you broke into the publishing industry, what did you write about?

I drew upon my experiences and the heroes I met to become an award-winning author. My love of writing continued into the freelance world as a journalist. I've placed my stories with top newspapers like the Boston Globe and regional magazines.I enjoy writing about extraordinary adventures and challenging topics, which, in turn, I hope make a difference through awareness and inspiration. My books celebrate unsung people - men and women who are inspiring and humbling – who reveal their stories of courage and survival – moments when they nearly died or might have given up. Instead, they called upon their inner strength and achieved their goal, survived.My first book, So Others May Live: Coast Guard Rescue Swimmers Saving Lives, Defying Death (The Lyons Press, 2006 and 2008) won four awards. I authored Changing the Rules of Engagement: Inspiring Stories of Courage and Leadership from Women in the Military (University of Nebraska Press) in 2012 and that same year, with Trish Marx, we published a tribute to the power and presence of our national flag My Name Is Old Glory, (The Lyons Press).  Two more of my books were written for foundations, collaborations documenting their stories.

Why are you passionate about book collaborations and ghostwriting?

It's authentic, rewarding. I like writing about companies and foundations or real people facing life challenges and how they survived tests of resilience.This is a fantastic way to help people and organizations that have valuable ideas and history but, don't have time to write a book.Working side-by-side with my co-author Trish Marx on our book about the Nation’s flag and with the Coast Guard Foundation to create a book celebrating their history gave me the chance to do what I’ve enjoyed doing all along: ask thoughtful questions to produce ideas and help individuals develop clarity about their own stories. I can refine and craft their interviews into chapters. These chapters come together as an intriguing book.My newest collaboration is a book for young adults called Innovators: Rock Stars of STEM. This partnership with Engineers for America and a Science, Technology, Engineering, and Math/Medical (STEM) school inspires up and coming generations of young adults to consider these fields as careers –areas too few young women and men think about pursuing as a career.

What inspired you to go to Harvard University?

While working as a public relations professional in Manhattan and officer for the U.S. Coast Guard, I received a lot of training and on the job experience. A life-long learner, I knew taking my passion to another level by earning a master’s degree would round out my skills or quite simply help me achieve my bigger dream - validation. After doing some research, I discovered Harvard University offered a Masters in Liberal Arts for journalism. I applied, got accepted and moved to Cambridge, Mass to begin summer courses. Graduation Day was a great moment for me and my family.I’m excited to share not only did I refine my writing and validate my skill but, two of my features were published as cover stories. Emerald Coast Magazine ran one about human trafficking and The Boston Globe ran my travel feature article about Chatham Lighthouse for their magazine.I can put together a story that will land the cover of a top-tier magazine or get published by a traditional, credible publisher.

How do you spend your time when you are not working on a keynote, book or story?

I’m curious, always learning and up for an adventure. I love to travel with my family – two sons and husband. Excursions have been to Iceland, Ireland and Europe. My husband and I take our kids skiing in Colorado and to the white-sandy beach here in NW Florida and 30A as much as possible.I am an avid tennis player, Hobie Cat sailor and paddle board fan - love getting out on the water with family, friends and my tireless water dog – a Golden Retriever - named Mae West.I’m excited to say I’ve wrapped up my time with the U.S. Coast Guard and retired as a captain. Now, I have more time to make a difference as a motivational speaker, write and travel. I look forward to getting to know and tell the stories of inspiring men and women. I look forward to facing the issues of our world, talking and writing about them. I will continue to document what’s going on to make a difference and drive positive change.

Why should I hire you?

I deliver presentations that are relevant and compelling, inspiring. I can tailor a speech to your audience be it a corporate C-suite or 600+ students in school or college.Need a motivational speaker for your audience? What to inspire them?Consider me.How long have you been saying you're going to write a book? If writing a book will catapult you or your business into the next level consider hiring a ghostwriter.Consider me.
Let's Talk!