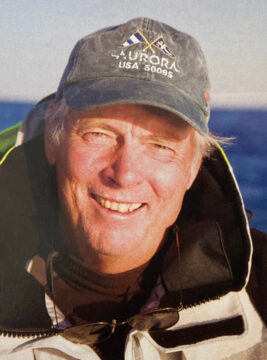 In person, Gary Jobson, 62, is understated, unhurried and unshaven. He wears a weathered baseball cap to cover his tousled salt and peppered hair. He wears his grey New Balance sneakers untied and paired with thick, meshed socks slouching around his ankles. His loosely fitted, blue pinstriped, long-sleeve shitt overlaps gray cargo shorts, a perfect ensemble for a jam-packed day of interviewing sailors. “What you see is what you get,” he says.

Jobson grew up in Tom’s River, a town on the Jersey Shore, part of a sailing community that stretches for 40 miles along Barnegat Bay. Here, Jobson became a champion at the early age of 13, racing competitively year round. The friendly rivalries of the 13 yacht clubs were a great way for the lanky teen to socialize, hone his talent and learn life lessons. “What you learn is more important than how you finish,” says Jobson, a husband and father of three daughters.

While sailing with the best of the best on the bay, he developed skills as a tactician—observing the weather, wind shifts, and the competition’s courses in order to recommend a direction for the helmsman. He sailed victoriously into the top collegiate ranks for SUNY Maritime College and as a professional coach for Kings Point and the U.S. Naval Academy. Then, at the Chicago Yacht Club in 1976—while attending an annual meeting of U.S. Sailing, the sport’s national governing body—Ted Turner asked Jobson to join the Courageous crew and race for the America’s Cup the following year. He accepted, and they won the world’s oldest sailing trophy.

The fame he enjoyed after winning the Cup with Ted Turner elevated him to a new stratosphere. Jobson coauthored a book with Turner, and became a member of the New York Yacht Club and spokesperson for Anheuser Busch’s Michelob. He then left coaching to focus on popularizing sailing as a sport by starting a lecture circuit to share “stories about the America’s Cup and racing at a grand-prix level,” he wrote in his 2011 book, Gary Jobson — An American Sailing Story.

“I never looked back and never stopped booking lecture dates, that is, until I was diagnosed with lymphoma and my life took a detour that would test me in ways I could never have imagined.” Ironically, even before being diagnosed with lymphoma in 2003, Jobson was chairman of a charity regatta for the Leukemia and Lymphoma Society for nine years. Now, however, Jobson was the one battling non-Hodgkin’s lymphoma. Doctors aborted two unsuccessful rounds of chemotherapy. A blood stem cell transplant followed, compromising his immune system. Shingles erupted, forcing his recovery steeply downward.

“My business was in the toilet. I looked like hell. I was lying in a hospital bed for ten days thinking maybe I was going to slip away. Tears were coming from my eyes,” says Jobson. “I thought, ‘All right, Mr. Superstar tactician. How are you going to get out of this?'”

“Three things came to mind,” Jobson explains. “l always need to know the course. More important, I need to have a goal. I need to stand up again. I need to concentrate on one thing at a time and have some fun.” Jobson did just that and, recovering from his year of treatments, set his new course and was working again and living by his motto, when you help somebody else out, the person that’s helped out the most is you.”

Jobson has now attended 316 events for the Leukemia and Lymphoma Society and helped raise more than 40 million. Despite his collision with incurable cancer leaving him “crumpled and hairless,” Jobson focused on promoting sailing as the sport’s national speaker. During his career, he’s authored 17 books and served as a race analyst for ESPN, NBC and the Olympics while intensifying his fundraising efforts for cancer research. He became America’s national sailing ambassador as president of U.S. Sailing, an unpaid, three-year post, which ended last fall.

“Gary is a real battler on and off the race course,” says Dennis Conner, four-time winner of the America’s Cup. “He has done a great job in his career in broadcasting, sailing like a champion and providing leadership in the sailing community. His help in fighting cancer has really made a difference.

Last summer, Jobson returned to his roots to develop a new book and video about Barnegat Bay’s sailing history and competitive spirit. The Bay’s yacht clubs produced generations of sailors and 10 Olympians. He captured video testimonials, which will complement a book to be published in 2014 to celebrate the 100th anniversary of the Barnegat Bay Yacht Racing Association, which unified the Bay’s yacht racing and fostered a Junior Sailing Program.

Susan Proko, a coach for the junior sailors, says, “When you hear Gary’s sense of propriety, of ownership, you know he’s from here. There’s a sense of kinship… he remembers his roots.

As for his longevity, Gary Jobson does not worry about his cancer returning and relates, “I have ten-thousand stem cells sitting on ice. I have one more go ’round for a rainy day.